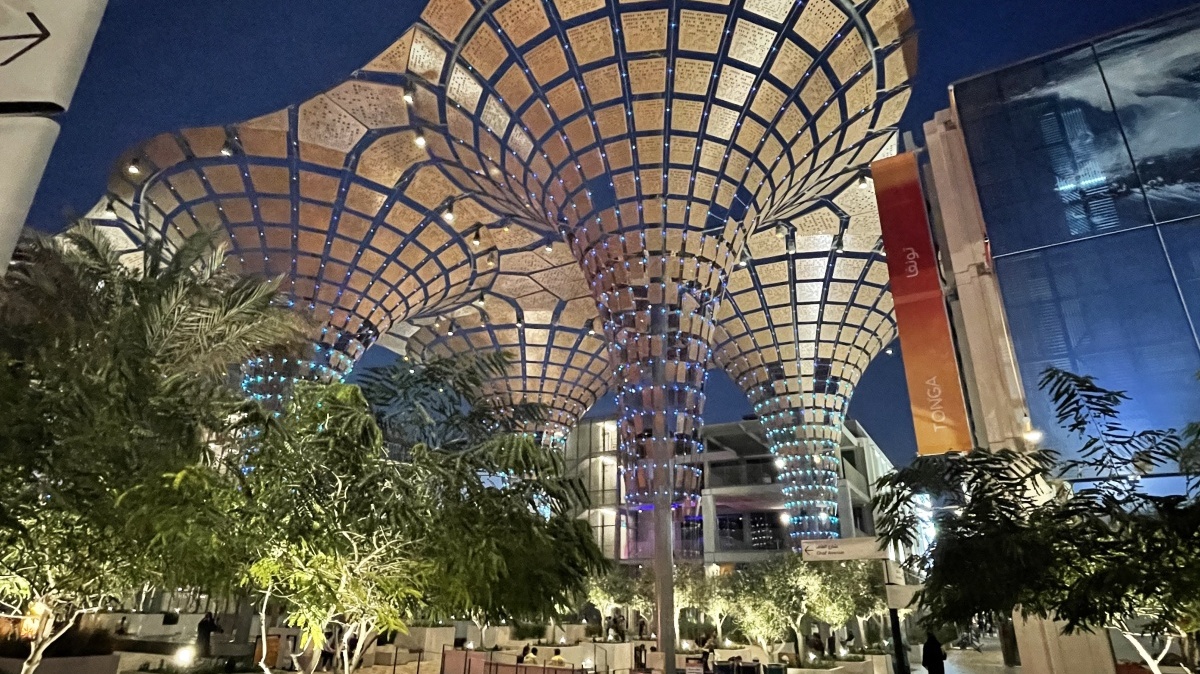 Expo 2020 is a global exhibition held in Dubai with the theme ‘Connecting Minds, Creating the Future’. The event was originally scheduled for the period from October 2020 to April 2021, but due to the pandemic, it will last 6 months, i.e. until March 31, 2022.

Hey human – move out of my way; you will hear from one of the hundreds of autonomous robots moving around the Expo area, if you stop on its route.

Official announcements say that it is a global event that combines innovation, technology, culture and art, offering the opportunity to learn about new ideas flowing from each country in the world. The exhibition, which has a tradition going back 170 years, is held every 5 years. It has always been a platform for presenting the innovations that shaped the world as we know it today. The first telephone, computer, and even….. ketchup or popcorn were presented to the world for the first time during the fair, which gave origins to the exhibitions that are held today under the Expo banner. The event currently underway in the Middle East is the largest ever organized in many respects.

Exhibition hall of the Russian Federation

In practice, it is an area of over 400 hectares of, in fact, a desert, located on the outskirts of the Dubai agglomeration, which was designed and built from scratch. Around the central, half-open concert hall called Al Wasl Plaza, with a diameter of over 150 meters, two categories of exhibition halls have been built, each of which is dedicated to a different country of the world. These two categories include uniform buildings with exhibition halls for 4 countries, each with separate entrances, and designer structures with inspiring architecture, each completely different, exceeding anything that even the most experienced globetrotters could imagine.

The exhibition hall of the Republic of Poland

The method of arranging which carries a message was the responsibility of the representatives of each country. Thanks to this, the category of designer exhibition halls of those countries that decided to invest in their rental, largely determined the unique, spectacular and diverse character of the entire event. Thanks to this, even the countries whose territory is poorly accessible due to its location or landform, e.g. mostly covered with desert sand, had the opportunity to show their best side by emphasizing tourism, technology, industry, culture, historical heritage and the role of they play in the world today.

Exhibition hall of the Kingdom of Saudi Arabia

What does Expo have to do with loyalty programs?

Seemingly not much. In practice? The goals of exhibitors and loyalty program organizers, as well as the techniques used to achieve these goals, are similar. Because the task is to stand out in a crowded marketplace, persuade recipients to familiarize themselves with our offer, persuade them to buy – here: visit a given country, build long-term relationships and finally become a permanent part of the life and spending structure of the visitors. It is worth asking yourself why individual countries really participate in the Expo? From the organizer’s perspective, it is obvious – the organization of such an event creates a whole series of independent revenue streams. The money flows to the Arab Emirates from exhibitors and visitors and concerns: the construction and rental of halls, airline tickets (Emirates is a government-controlled company), hotels, expenses for all other attractions, but the Expo tickets are not included. Plus the promotion of the country around the world. There are more than enough reasons. And from the exhibitors’ perspective? Beyond simply building awareness of the existence of a given country (the task seems simple if you are Great Britain or more complicated if you represent South Sudan, for example), to show its history and achievements, the overarching goal is to get visitors to visit (direct spending stream to a given market).

What are the conclusions for loyalty program organizers from Expo 2020?

They come to their own mind from the very beginning of the visit. Here are the main ones:

1/ Eliminate all barriers to reaching and using the offer

There are many different ways to get to Expo 2020. As the location is a dozen kilometres from the centre, several metro stations were built….. especially so that guests could easily get there and back. The last of the stations is located directly at the trade fair. In addition, you can get there by taxi or Uber, dedicated shuttle buses or by car (where, unlike at the fairs taking place in Europe, there is no problem with parking). At the same time, you should not be afraid of premium offers that require payment for joining. After all, most of the visitors have paid for their entry tickets.

2/ Control the database from the very beginning of program development

Despite the ease of access, several conditions must be met to enter the Expo 2020 site. First, present your vaccination certificate, and in the case of unvaccinated people, a negative PCR test result. Secondly, you have to hand in your luggage for inspection, similar to airports, and go through metal detecting gates. The analogy with loyalty programs is obvious. Not every program is for every audience. The role of the selection is to invite those for whom the offer has been constructed. This will ensure that we will only have participants in the database for whom we maximize the chance for activity and return on investment.

Among the Expo 2020 exhibitors, two model approaches are noticeable. The first group showed what a given country is, what values it presents, what its history is and the best it has to offer in each of the main areas to be promoted during the fairs. The second group talked about what they were aiming for, what development ideas they had, what technologies they were working on and where this work would lead them in the future. The difference is very subtle, and at the same time, obvious. This makes the pavilions of individual countries feel like a museum, and some like a research centre of a modern technology company. It is up to each of us to decide what message we send. In addition, the varied use of technology completes the experience, making the recipient subconsciously feel the difference.

There is no need to convince anyone to communicate with recipients based on the art of consciously building relationships, influencing imagination and emotions, using metaphors and stories taken from everyday life. The very form of selecting means, as the experience of Expo 2020 shows, it already requires a lot of educational input. Because we can put even the most fluent English speakers [this is the second officially used language in the Arab Emirates], entertainers and hostesses and verbally convey the same message to every visitor. We can also use the leading idea of the entire exhibition concept to create a message that sells itself, inspires discussion and finally tells the story using a digital message.

Far from being prejudiced, not many people associate the word Russia with ultra-modernity and development work on the potential of the human mind. Thanks to the use of storytelling, what we experience in this country’s pavilion gives the effect of an innovative and carefully thought-out communication strategy, organized around the most perfect of human organs, which brings together individual sections of the exhibition showing the history of evolution, right up to work on the cosmos development.

The concept of the brain is the central message in the Russian pavilion.

People love collector type actions. The organizers of Expo 2020 used the concept of passports (we know it from somewhere, don’t we?). Consequently, visitors were given an extra incentive to visit as many countries as possible by collecting stamps confirming the visit. This argument is particularly in favour of the mechanics of loyalty programs based on a credit points mechanism, encouraging repeat purchase transactions. In addition, many countries organized gamification activities that allowed guests to unite and compete with each other. In this respect, we are only limited by our imagination when it comes to the idea and construction of action rules. If used in a particularly creative way, it can hide the shortcomings of the offer. An example? In the pavilion of the Kingdom of Saudi Arabia, a country where it does not rain at all for half of the year, and in the remaining months, rainy days can be counted on the fingers of one hand; gamification activities were based on a concept using water, which was the basis of a game in which both adults and children eagerly participated. Some coped differently by organizing piano concerts or shows during which words were displayed on the facades of buildings together creating a dynamic message.

The display on the facade of the UK exhibition hall

The recipients of loyalty programs are people. And those, regardless of gender, skin colour or the language they use, have a lot in common. For example, they regularly get hungry, and as a consequence, they have to eat and drink. It is worth organizing activities around this, which will make them pay attention to our offer. Any examples? Queues formed in front of some pavilions. Only a few of the countries used it as an opportunity to offer visitors a gift in the form of a free bottle of water, a cup of coffee or a small snack. This role was mastered to perfection by the organizers, who at the central point of Expo 2020 in Al Wasl Plaza organized regular concerts, light shows and a whole range of other special events that gathered guests and kept them there for long hours.

As always, it is easier for market leaders to get their message across to their audience. The issue of scale makes most people want to see what you have to say. This is probably why you had to stand in line to get to the US pavilion. At the same time, those who can ascribe a specific function or characteristic to themselves have a chance to stand out. Kiribati – the easternmost point on the earth in relation to the date change line, Tuvalu – the smallest country in the world [although this title has, quite rightly, been claimed by several other countries]. Wherever we are, we can use it in our communication. Some have missed the opportunity to stand out. This proves that the bare minimum, i.e. the base message that does not use all that I write about above, is not sufficient. It’s just like on the market of loyalty programs in Poland. We have over 130 of them, but only about 20 programs can boast a declared participation rate of more than 5 percent. The experience of visiting the pavilions of Albania or Montenegro left me very dissatisfied.

The list of conclusions and experiences from Expo 2020 for loyalty program organizers is long. In addition to the above, it is impossible to forget about the obligation to communicate using mobile applications, digitize the entire message, prepare an offer for participants’ children, introduce a premium offer for the most demanding customers, etc.

2
Skip back to main navigation